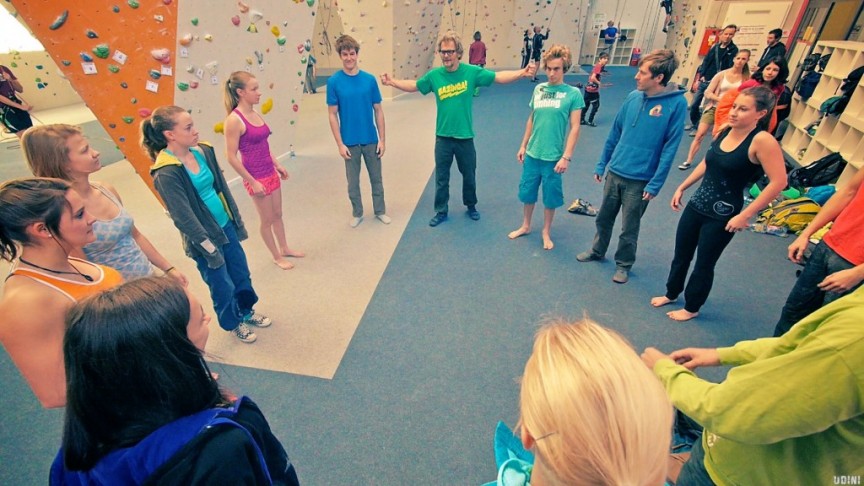 My job as head coach of the German Alpine club’s Bouldering team has many faces. It includes to facilitate thinking or learning new behaviour and improve physical skills for personal growth and advancement in the demands of bouldering contests. Another aspect is to transfer as much of my knowledge and experience to my climbers. I’m involved in all the aspects of the sport, including physical and mental development and the application of tactics and strategies during the contests. Competitive bouldering is relatively young so common sense on training program design and injury prevention is not yet established. Climbing is mostly a self-taught activity up to a certain age so that some athletes are not used to being coached. We than have to establish a practise of feedback and critique. The athlete perceives a contest from a first person perspective, feeling a slippery hold or fading strength first hand – whereas I have an outside overview – observing body language, comparing the competitors’ different solutions and keeping the judging in check. To bring these two perceptions to match and to keep the communication running so that we both benefit from our different perspectives is the biggest challenge for any coach.
Often I just ask questions and offer opportunities that will challenge my athletes to find answers from within him- or herself.
In the following you are going to see a couple of things we tried out and experimented with over the last five years.

Physical Education
One arm pull-ups and such were probably the exercises you were expecting from this chapter, but what you see here is a little contest between Jan Hojer and Thomas Tauporn and not a part of our general physical education. Most of my athletes are already strong before I meet them, they have to be successful on a national level a long time before they are considered for international contests. Physical training almost doesn’t play a role once the season is on – but is of course very important for general conditioning and especially injury prevention.
From assessment to not-injury
With our physios and docs we try to cover the complexity of the medical issues involved in bouldering in general and specified in a competitive setting. We don’t think too much of possible injuries that could happen. However, there’s still the remaining risk of accidental injuries as well as injuries because of fatigue over-training. We try to tune the performance of the athlete to not develop to much stress on any structure, which would lead to an injury, as well as supporting the athlete in a way, that she can show her maximum abilities in the competition.
Beside the obvious medical overall test, we’re developing performance based checks of the body. In these tests we try to see how good the athletes body can cope with the impact of competitive bouldering.
Furthermore we try to identify possible weak links, like muscle dysbalancies which would hold the athlete back from optimal performance, as well as they could lead to injuries.

This is the most special interest of the 4 clips about the German Bouldering Team trainings. It’s also the one with the most german spoken, but I’m confident that even if you don’t speak german you will be able to figure it out through body language and the route setters gestures.
Designing meaningful training for the performance level of our athletes can be tricky. In most commercial gyms are rarely enough hard problems to keep them occupied for a longer period. For a coach it’s essential to work with his athletes to find the right difficulty for a given problem. For our workshops I cooperate with our route setters as my french colleagues do with Jacky Godoffe in their training facility near Fontainebleau. We are very lucky to have some of the most creative route setters in Germany plus that some of our athletes are excellent route setters in their own right. We discuss the issues of a work shop together, than try to set accordingly. Everybody is benefiting from this cooperation, both the setters AND the athletes get instant feedback and if everybody learned a bit and leaves inspired, I’m happy too!
In our workshops during the preparation phase we focus on climbing technique in the broadest sense – our athletes have to be prepared for anything the route setters throw at them!

Find something difficult and repeat it until it’s easy
Something that takes your full concentration, technique and just the right amount of power to achieve. If you do it perfectly every time then it’s not difficult enough for you.
Find such a difficult movement, dyno or challenge and spend time with it. Repeat it, reflecting on each attempt objectively and making an effort to improve each time. Attempt, analyse, adjust, attack, again and again.
Once you can repeat it with success almost every time and it becomes easy, then move on. Find a new challenge, a dyno, a tricky balance movement or a raw power stunt and repeat the process. Use your experience from the previous challenge to give you confidence.

Don’t move on too soon before you really nail something. Often there is much more to learn from a move than you might think and you float around from move to move improving at each one a little bit but never truly mastering any of them.

This is the last episode of the German Bouldering Team trainings, 2009-2014 series
Instead of staying in the hotel room, our team likes to explore its surroundings. As boulderers, we all have a high level of curiosity.
When we are travelling we have to work with what we find, for example at playgrounds as you are going to see in a moment. Over the years we all become very creative in this regard and can find meaningful exercises in basically any environment.
Jan Hojer, won Chongqing Boulder World Cup 3 days later! Juliane Wurm, won Chongqing Boulder World Cup 3 days later!
the real thing – BOULDERING! (outdoors and memorable problems
Most of my athletes like to climb outdoors and I encourage that. From Cologne, where I live, it’s only a five hour drive to Fontainebleau, the best area in the world for becoming a well rounded climber. Bouldering with my athletes here is very enjoyable since they tend to be more relaxed and playful than grade oriented boulderers. Sure, they might have their projects on rock but for the most part they just enjoy the moves and the sensation of flow that you get from climbing well below your limit. As a rule of thumb, I ask them to focus on plastic bouldering though one month before the season starts or before an important competition.
This concludes the German Bouldering Team trainings, 2009-2014 series – Thanks for watching!